It’s not as dramatic as visiting the past in a white  limousine, but wandering around the remains of the old mine gave me a glimpse and a feeling about an era long since past. The remains of the tipple and the water tower, remnants of the Galt Number 8 mine are two familiar landmarks of Lethbridge, Alberta.  I grew up in Lethbridge, and these structures were always there,  black shapes standing out against the blue prairie sky near the west end of that other famous Lethbridge landmark, the High Level bridge. These three icons speak volumes about the history of not only the area but of the country. From the  1870s until the closing of the last of the mines at Shaughnessy in 1965, Southern Alberta coal helped fuel the Age of  Steam. That age was over when I grew up here, yet I always had a sense of the coal mining past. The coal era brought waves of immigrants, and my ancestors were among them, having immigrated from Scotland.

As a boy growing up in North Lethbridge, my wandering often took me near Hardieville where I’d explore the concrete foundations of the structures of the old Galt No. 6 mine, but I’d never had a close look at the remains of the No. 8 mine. On this visit to Lethbridge, I decided to correct that. Following is a gallery of some of the pictures.

The first two photos are of the remains of the tipple – a tower-like structure set directly over the main shaft. It housed lift equipment to raise and lower coal cars, and to transport miners underground. Tin cladding  once enclosed the structure, but years of exposure to Southern Alberta winds and winters are gradually peeling it off. I was surprised to find that the framework is constructed of thick steel girders riveted together and  set into concrete base. It was built to last.

The photo labeled back view on mine engine shows the remains of an engine used to pull coal cars, as seen in the next photo, through the mine shaft. The photo below that is the steering wheel of an unknown vehicle. It was just sitting by a pile of old railway tracks, the kind used inside the mine. I’m sure that it has an interesting story to tell.

The old water tower is self-explanatory, and the remaining shots show some of the original buildings.

There’s lots of history in this place, and it was eerie to walk through the site without anyone else around. The site is not being preserved – it was just left this way when it closed down in 1957. There are literally tons of metal machinery spread out over the several acres that the site occupies.  Underground, there are miles of shafts, long since sealed, and now probably filled with water.

There’s a lot of history here; I know that I’m repeating myself, but history means stories. … 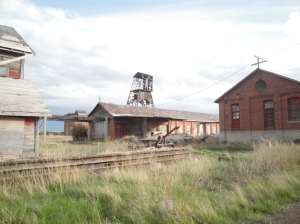 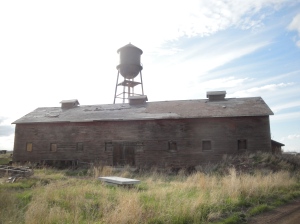 2 thoughts on “Exploring the Past”